Állandó Tag
A következő angol gyerekmese címe Lazy Jack, a Bolond Istóklehetne a magyar megfelelője.
Lazy Jack
Once upon a time there was a boy whose name was Jack, and helived with his mother in a dreary cottage. They were very poor, and the oldwoman earned a few pennies by spinning, but Jack was so lazy that he would donothing but bask in the sun in the hot weather, and sit by the corner of thefire in the winter time. His mother could not make him do anything for her, anduntil at last she warned him that if he did not begin to work for his porridge,she would turn him out of the house to get his living as best he could.
This threat finally stirred Jack, and he went out and founda job for the day working for on a farm. The farmer paid him one penny, but hewas not used to having money, and as he was coming home he lost it as he passedover a stream. “You stupid boy,” said his mother, “you should have put it inyour pocket.” “Next time I will,” replied Jack.
The next day Jack went out again, and found a job with a cowkeeper, who gave him a jar of milk for his day’s work. Jack took the jar andput it into the large pocket of his jacket, spilling it all, long before he gothome. “Dear me!” said the old woman; “you should have carried it on head.”“Next time I will,” replied Jack.
The following day Jack found a job with a farmer, who agreedto give him a cream cheese for his work. In the evening, Jack took the cheese,and went home with it on his head. By the time he got home the cheese wascompletely spoiled, part of it being lost, and part matted with his hair. “Yougood-for-nothing boy,” said his mother, “you should have carried it verycarefully in your hands.” “Next time, I will,” replied Jack.
The day after this Jack again went out, and found a job witha baker, who would give him nothing for his work but a large tom-cat. Jack tookthe cat, and began carrying it very carefully in his hands, but in a short timeTommy scratched him so much that he was forced to let it go. When he got home,his mother said to him, “You silly fellow, you should have tied it with astring, and dragged it along after you.” “Next time I will” said Jack.
The next day Jack hired himself to a butcher, who rewardedhis labours by the handsome present of a shoulder of lamb. Jack took the meat,tied it to a string, and trailed it along after him in the dirt, so that by thetime he had got home the meat was completely spoilt. His mother this timecompletely lost her patience with him, for the next day was Sunday, and she hadto make do with cabbage for her dinner. “You nincompoop,” said she to her son,“you should have carried it on your shoulder” “Next time I will,” replied Jack.

On the Monday, Jack went out once more, and found a job witha cattle-keeper, who gave him a donkey for his trouble. Although Jack was verystrong, he found some difficulty in hoisting the donkey on his shoulders, butat last he managed it, and began walking slowly home with his prize. Now ithappened that in a house along his way there lived a rich man with his onlydaughter, a beautiful girl, but unfortunately deaf and dumb; she had neverreally laughed in her life, and the doctors said she would never recover tillsomebody made her laugh.
Many tried without success, and at last the father, indespair, said he would offer her in marriage to the first man who could makeher laugh. This young lady happened to be looking out of the window when Jackwas passing with the donkey on his shoulders, the legs sticking up in the air,and the sight was so comical and strange, that she burst out into a great fitof laughter, and immediately recovered her speech and hearing. Her father wasoverjoyed, and kept his promise by marrying her to Jack, who was thus made arich gentleman. They lived in a large house, and Jack’s mother lived with themin great happiness until she died.
Utoljára módosítva a moderátor által: 2014 Július 28
D

Előre is köszönöm a segítséget!
B 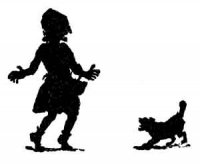